Interestingly enough, after I finished writing about the distribution of Edwards in America I just happened across a site called Surname Profiler that provided me with similar data for the UK. This site is not subcription-based so everyone can access it. It is based on a research project at University College London. You can read more details about the project on the website.

Not surprisingly both the 1881 and 1998 distribution of the surname Edwards is concentrated in Wales and the English Counties surrounding Wales. 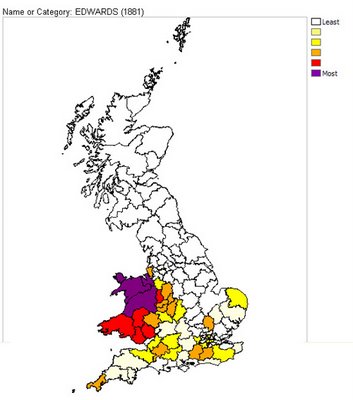 The counties in purple and red with the highest concentration of the surname Edwards are all in Wales with the exception of one little red county to the right. 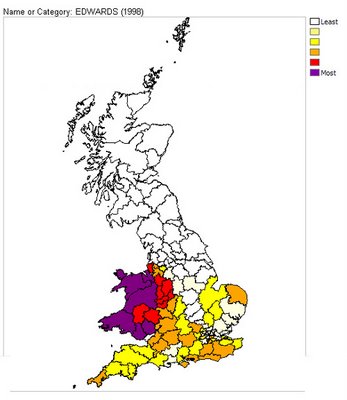 Ancestry.com has an interesting little feature that displays the distribution of a particular surname in the United States at different points in time. While the results are generic it provides a snapshot of how our Edwards and others have shifted geographically over time. 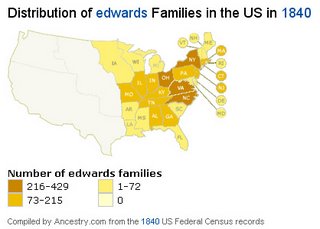 In 1840 most Edwards families were located in New York, Ohio, Virginia and North Carolina. Our William Edwards was a relatively late arrival on the scene in the United States, arriving in the 1770’s. There were a number of other Edwards who arrived much earlier. 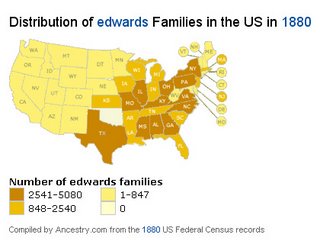 The Edwards families start spreading out across the country as well with most of them residing east of the Mississippi. Among the descendants of William Edwards there was movement too. No longer was the family confined to New York.

At least one of Elizabeth Edwards Allen’s children (Eleanor Allen Little) had resettled in South Hadley, Massachusetts. Also by 1880, Stephen Ostrom Edwards had moved to Providence, Rhode Island. Jane Edwards and her husband, Newton Vanderveer had moved to Michigan. Sarah Jane Olmstead and her husband, Daniel Cornue were in either Wisconsin or Illinois. Abijah Olmstead had relocated to Nebraska. 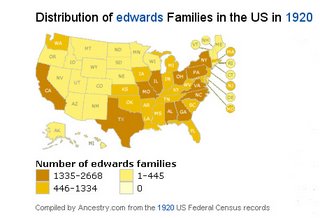 By 1920 Edwards families had covered the whole United States and included a fairly large representation on the west coast. New York state remained a prime location to find Edwards as well as in 10 other states. A majority of the descendants of William Edwards still lived in New York but that was becoming increasing less common as they left to find their fortunes elsewhere.

You can find this geographical data on Ancestry.com. However, please note that Ancestry is subscription-based and you not be able to access the data without the subscription.